Can you survive one rainy afternoon trapped indoors in 1984? No cell phones... no Gameboys... no INTERNET?!

More Life In The Analog Age

This was created in GBStudio 1.2.1. to play in browser, emulator, and real Gameboy/Gameboy Color hardware.

Thank you for your support!

Thank you verry much for this Masterpice of Homebrew gaming. There should be definetly a much bigger part two, eventualy a half day outside and evening inside? Or a part that plays in the same year but with older childs. Or a few years later, also 1989 oder 1990 where there was the NES and Gameboy we didnt play them the whole day, so it was like in this game with the Comodore :) you Play but you also enjoy thinks like Lego, Comics, Action Figures and so on.

I realy love that Game you build, spend arround 1h for 100% and was impressed of the realy good idea to implement also games in a game to make it feel like real :)

I was born in 1988 and a child from the 90's but i also feel me that much remembered to my childhood when i played it, realy impressive.

Ok the movement of the Charakters could be a bit better (you stuck often but its not bad for the gameplay itself so its only a little info) its like reading my english xD i think you can understand what i mean it them but its not the best how i tell it :D

This is also my first coment on Itchio because i only made my account to rewview your game and whant to thank you for it.

An hour more gameplay and press it on a Cartride, i would defintly buy it promptly for 50€ or more (with boxing and printed manual, eventualy a few goodies).

After the first 5min i thought "its ok but test another one". Thanks that i dont do it, 5min later after finish the first two missions it captivated me and after the next 5min where i also found the first secret i was realy impressed and cant stop playing until i finished it :) now after finish it i whant more :D much more from that stuff.

Realy, realy interessting and exciting idea you had for this game. I didnt know any other game that made remembering on those nice days with that simple gameplay and that on a Game Boy, absolutely briliant :)

Thank you so much for this experience! :)

Aw, thank you so much! I'm so happy you liked it. It's completely based on real life events. This is how I used to feel as a kid trapped inside when it rained. I'm glad that the same feeling came across to you as you played.

I do like all of your feedback as well. I do have ideas for a second game in this series, but I'm currently busy working on another game at the moment. It's more action and less story based.

I'm really delighted to hear that you had fun finding all the secret missions and really unlocked the full game. I love playing and making games that reward you for putting in that extra effort, plus the last game you unlock is a ton of fun! Did you beat that one as well? There's a prize waiting for you if you do...

If you did like the characters, setting, and general feel of this game, I can recommend the webcomic and cartoon series I created by the same name. If you are interested check out this site: http://www.lifeintheanalogage.com/

I'll let you know when I finish my next game so you can check that one out as well.

Thanks for playing and for taking the time to write such a heartfelt review!

offcourse i beat the last Game :D i only didnt say anything about it because i dont whant to spoiler someone :)

i would be verry pleased if you can inform me when your next game is ready, now im excited for it.

Also i will look at the webcomics soon when i find time for it :) thanks for the information.

Completed it but not to 100%. I did not find the 3rd secret but suspect something to do with beer bottles. Relaxing game I played through while waiting to pick a relative up from a hospital appointment which was around an hour. The in game space invaders difficult but just kept mashing the button and only moved when no more to shoot in the area I could not get pass level 4 as then seems they shoot quicker than I can. This is a spin off a comic series that I did not know about, hope to see more. I played through this on a flashcard on a DS lite. Very well put together game.

Thank you for the positive feedback and review. I'm glad you enjoyed it! I'm also glad to hear that the play through was an hour! That's perfect, it's exactly what I was aiming for. If you want to see more Life In The Analog Age you can go here or here. Thanks again!

Yeah, the only problem is the save function. So i used save States for it, but It's very nice game. I like it and finally i can beat it after some puzzle.... nice work.

Aw, thanks so much! I'm so glad you liked it and it worked out.

I had a blast with this! Love the retro feel of it all!

Thanks so much! So glad you enjoyed it.

ᴵ ᶜʳᵉᵃᵗᵉᵈ ᵃⁿ ᶦᵗᶜʰ.ᶦᵒ ᵃᶜᶜᵒᵘⁿᵗ ʲᵘˢᵗ ᵗᵒ ᶜᵒᵐᵐᵉⁿᵗ.  One of the best (and finished) GBstudio game! Challenging fetch puzzles. Fresh art style. Fitting music. Immersive world. Gave me nostalgia to a time I wasn't even born in. I'll deffo check out your webcomic after this!

rn, I'm stuck on the TV guide part. I lazed out going back to the TV and just guessed (wrongly) the channel to mom. I refreshed the game, hoping I'd go back to before I went to mom. Clicked "Continue", but the game got stuck on the menu / "Hours left to survive" screen. I guess, playing in the browser didn't actually save my progress? I'm contemplating whether to give up because I don't want to go through all those again.

Also, there's one thing in the map layout that bothers me a bit. It's just minor and I know it'd be inconvenient and too late to change it. But the stairs between ground and second floor could go on switching me back and forth forever if I press right. I suggest it to instead be U-shaped stairs or something.

Edit: pressing *right (instead of left) would get me switching rooms back and forth forever.

I’m so glad you enjoyed playing! Thank you so much for the kind words!

It’s strange that it got stuck on the menu, I’ve never heard of that. It does save when you play in browser.

If you get up to that point again and you can’t find the TV Guide, just just need to look in the second place in the house that most TV Guides were probably read :)

I hope you enjoy Life In The Analog Age! A good place to start are the web cartoons on YouTube.

Hi. The "stuck on save screen" happened again. This time it was in the living room after I talked to dad about the commodore. I refreshed the game that moment just because [I wanted to undo me clicking the channel list, fsr].

I tried the continuing saved game after refresh thing earlier quests ago and it was working just fine.

So... I tried "give up" but instead of resetting all progress, it kept the chores done. No litters in my room, I was free to go out and the achievement screen triggered. Talked to my bro in his room, no litter, same dialogue as when I already helped him. Same with mom in the kitchen. My art already on the fridge, and the worm in its home. Couldn't find dad anywhere and the cat. The toilet already used and everything. All these while the save screen shows I still have 5 hours left to survive. Weird, lol. I can trigger the light switch in the basement though. I "gave up" once more, still the case.

I'm sorry I happen to uncover these. Still a great game and experience!

So strange. I’ll try and replicate the bug. It sounds to me that you were forced into what I named the limbo state. It’s after you beat the game but still need to find the secret missions. Thanks for the info! Sorry it keeps doing this. Are you trying for the 100%? FYI, you don’t need the Dad in the living room to do the TV Guide mission.

This was really fun and had some great challenge to it.

Love the soundtrack and the art so much. Well done!

Thank you so much! I’m glad you enjoyed it!

It's a great game, but I found a bug. After beating the high score once in Space Invaders, if you try to play the game again and score even higher (4 rounds), you'll be stuck in the game screen. The ship goes left and right, but no more waves of enemies will appear and you never get back to the normal game. I don't know if it happens all the time, but now I'm stuck and unable to find the 3rd secret mission.

Oh! Thanks so much, I’ll fix that!

Thanks! And congratulations, it's an stunning beautiful game, and was a pleasure to play it.

You just need to talk the the brother and thr mom :)

One of the best, most atmospheric GBstudio games I've had the pleasure of playing.

Kudos mate, really threw me back to what seems like a thousand years ago!

Aw, thanks so much.  Glad you enjoyed it!

Really nice and nostalgic game! Especially as someone that grew up with a Vic 20 and no internet.  The only issue I ran into was the space invaders.Is it possible to actually beat the high score?

Thanks so much! Yes it is. I found if you just keep hammering the button, it decreases the chances of getting fired upon. I hope that helps! :D

You can now completely bypass the game if you are stuck. Just talk to your little brother twice. 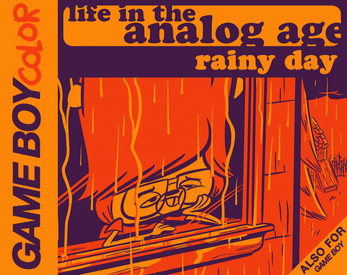